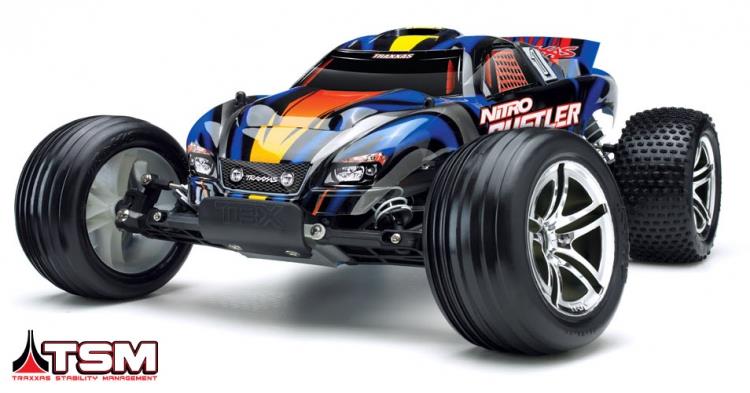 Hard-Charging 80+kmh PerformanceThe Nitro Rustler is the first name in high performance 2WD nitro stadium trucks. Powered by the proven performance of the TRX 2.5 Racing Engine, Nitro Rustler totally out-muscles the competition with top speeds beyond 80 kmh! The TRX 2.5 also pumps out the torque for brutal, wheel-standing launches and absolutely ruthless acceleration. The sleek body design cheats the wind with its smooth curves and low-slung stance, while the outrageous graphics dominate with style. The separate wing securely bolts to the body with precise aluminum hex hardware. Chrome 2.8 Twin Spoke&#8482; rims are wrapped with pre-glued Alias&#8482; step-pin tires in the rear and Alias&#8482; ribbed tires up front. The high-tech rubber compound ensures great grip on a variety of surfaces. Grey-molded composite parts are thoughtfully integrated to enhance the look of the chassis. Fast, light, and loaded with power, Nitro Rustler's power-sliding, dirt roosting attitude will have you reaching for the throttle again and again.

Where Power Meets Technology&#174; Nitro Rustler's TRX 2.5 Racing Engine is nothing short of amazing. It is the most advanced engine in its class and comes loaded with all the hottest performance hardware. The two-needle composite slide carburetor, trick porting, and free-flowing rear exhaust deliver class-leading horsepower and high-revving speeds over 50mph. Plus only Traxxas has the true push-button starting convenience and safety of the EZ-Start&#174; Electric Starting System. Traxxas makes nitro easy so that anyone can experience the hard-charging action and intense driving excitement Nitro Rustler delivers. Hammer the throttle anywhere in the power band and Nitro Rustler responds with searing acceleration and the sound of pure, high-revving nitro power.

Accelerate Faster/Corner Faster/Brake Harder/Stay in ControlTraxxas Stability Management (TSM) allows you to experience all the extreme power, speed, and acceleration that was engineered into your Nitro Rustler making it much easier to control on common slippery surfaces such as loose dirt, smooth concrete, and even ice and snow. Punch it off the line and TSM goes to work sensing the vehicle&#8217;s direction and making steering corrections to provide straight-ahead full-throttle acceleration without fishtailing, spinouts, and loss of control. TSM also works during cornering, first making intuitive corrections to maintain your line, and then allowing you to hammer the throttle earlier in the turn for much faster exit speeds. Braking is dramatically improved as TSM works to keep you arrow straight until you come to a complete stop.

Built Traxxas Tough&#8482;Nitro Rustler is not only built to perform with its adjustable slipper clutch, disc brake, and race-inspired suspension geometry, it's also built Traxxas Tough&#8482; for all-day driving fun. Nitro Rustler's robust design keeps annoying breakage to a minimum so that the action can keep going on and on. The rugged 6061-T6 aluminum chassis forms a rock-solid backbone that also draws heat away from the engine. Full rubber-sealed ball bearings provide the ultimate protection and low maintenance for nitro environments. The Magnum 281&#8482; transmission uses a planetary gear differential with built-to-last hardened steel gears. The gear diff requires no time-consuming adjustment and is virtually maintenance free. The oil-filled Ultra Shocks&#8482; use exclusive X-ring seal technology for reduced friction and superior leak resistance. Traxxas engineers are dedicated to keeping you on the throttle, not on the workbench.

Ready-To-Race&#174;Nitro Rustler comes as a complete package with professional factory assembly; installed high-power pistol grip radio system. Plus, Nitro Rustler is backed by a team of R/C pros who aim to provide the highest level of factory support possible. We're with you every step of the way to answer questions and help you get the most from your Nitro Rustler. Toll-free* support is available via telephone, e-mail, or online. The TRX 2.5 Engine is backed by the Traxxas Power Up Plan that makes it simple and affordable to upgrade to a brand-new engine and even more power down the road. As with any Traxxas model, Nitro Rustler is about experiencing total performance and satisfaction, not just in the truck, but also with the company that stands behind it.